A top-level React developer can help you to build impressing interactive components for your website or web application, from conception to testing. React is in high-demand accordingly to Stackoverflow. They say JavaScript is the most popular programming language, and ReactJS is one of the most popular frameworks.

Then why is it so hard to find great developers that can code in ReactJS? For once, all the big companies, like Facebook, Netflix, and Airbnb, get their developers from the same pool. But if you take the right steps and use the right platforms, it will be easy to find React developers.

Before we get into how and why you would hire ReactJS developers, let's take a quick look at what React is and what it can do for your business.

What is React, and what are its benefits
➤  Increased productivity by reusing components
➤  Effective performance with the VirtualDOM
➤  Stability improved
What makes React so popular?
What does a React.js Developer do?
What should a React JS developer know?
How do you find the best React.js developers?
➤  Hire a React developer on your own.
➤  Hire a freelancer React Developer.
➤  Hire a React Developer from a reliable partner (software development company)
How an experienced software development company helps you to hire the best React developers

What is React, and what are its benefits?

Let's first answer what React is. Facebook developed React—also known as React.js or ReactJS—that became open-source in 2013. Google Trends says it is the most used JavaScript framework for making fast and interactive user interfaces (UI). 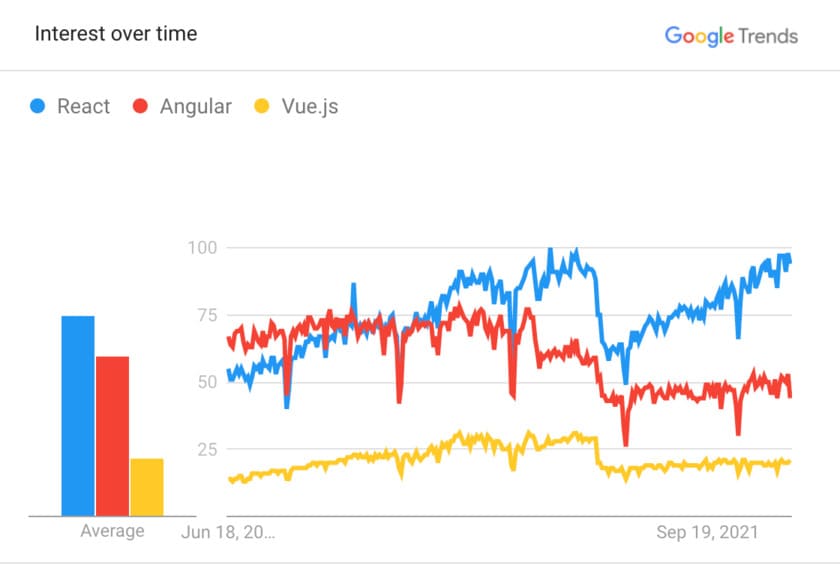 Find out the differences between React and Angular.

React's main competitors are Angular, and Vue.js, but it has been consistently the most popular framework of the three in the last years.

React.js is declarative, efficient, and flexible, making life easier for developers by providing the means to create a code that is more readable, reusable and easier to maintain than, for example, a website in vanilla JavaScript.

It’s a framework with a small API. React provides the core functionality web development, but you might use libraries for enhancing the UI, formatting dates or numbers, etc. This is an advantage as you can choose which libraries you want to use.

Lastly, React supports all modern browsers. You can also make native apps for iOS and Android with React Native. Just don't mix up React and React Native. The first one is only used for web apps, while the second one is used for mobile apps.

React components are reusable, which is very helpful for component structure. Many companies switched to React because it lets them manage components and set up structures that make their web application consistent. When wrapping React components for reuse, you can abstract logic and layout to make rendering faster. Also improves developing times as you produce less code due to the reuse of existing code.

Effective performance with the VirtualDOM

"The virtual DOM (VDOM) is a programming concept where an ideal, or "virtual," representation of a UI is kept in memory and synced with the "real" DOM by a library such as ReactDOM," says the official React documentation.

VirtualDOM can also be considered a virtual copy of the UI that lets React do calculations before displaying a new layout. It improves how well the application works.
That's exactly why this framework is called React: when the state changes, React "reacts" and updates the DOM.

React's development team did the hard work of making React handle DOM updates, so developers could focus on building components. In turn, this makes the application work better and removes a lot of unnecessary work from the developing perspective.

What makes React so popular?

React is so popular because it has a lot of benefits. But there are two main reasons why React has become so popular in the past few years:

What does a React.js Developer do?

Using React.js, a React developer builds user-facing features for websites and apps. They are front-end developers, a subset of developers in charge of everything users see on their web browsers or apps. So, they ensure that a website or app looks and feels good to users.

Some of the exciting things a React developer can do are: create menu buttons, online forms, graphic icons and images, voice recognition (Siri and Cortana), and a gesture-driven interface.

Before a website goes live, software testing experts test the code. On a clients' software project, developers who work with React may also work closely with back-end developers, web designers, and project managers.

What should a React JS developer know?

For a React.js candidate to succeed in this competitive profession, they should have the following React developer skills:

Want to read more about React? Take a look here.

How do you find the best React.js developers?

Hiring the right React developer for your team begins with knowing where to look. To simplify this process, we've identified top solutions:

Hire a React developer on your own.

This may be your first choice when looking for a new team member. You can set a budget, align expectations about the candidates' experience and background, create job offers, and post them on job boards like Glassdoor, Indeed, LinkedIn, and Landing.jobs, Stack Overflow, and others. Here are the benefits and drawbacks of this procedure:

Finding a freelancer can be an option if you don't want to hire someone full-time. You can look for React developers on platforms like Fiverr, Upwork, or Toptal and screen candidates based on their profiles, projects to which they contributed directly as React experts, and work reviews.

Hiring a React developer using a more standard approach can take up to four weeks. It doesn't have to be this difficult. Assume you've never considered contacting a staffing augmentation company specializing in mobile and web development to assist you. If that's the case, you might not know its benefits because you think it's more expensive.

When you hire a React developer, partnering with a software development company saves you time and money.

Finding a React developer isn't easy if you don't know what you need from one in the short and long term.

While hiring a freelancer or in-house employee can take a lot of time, working with a software development partner on a long-term basis can be incredibly beneficial when:

If you’re looking for the greatest React to help you create a new web app or work on an existing one, Imaginary Cloud is the solution.

We are experienced in what we do as we have worked on more than 300 projects. Therefore, we easily integrate with the clients' culture and values and their expectations.
We know that clients are satisfied with our work - the reviews on Clutch confirm this.
And most importantly, we have the know-how and respect the time and needs of our customers.

Are you ready to have us as your partner?