As you may know, Rails 5 is here, and has an exciting sidekick! Ladies and gentlemen, let's put our hands together and welcome Action Cable, the novelty framework that integrates WebSocket communication with Rails.

Today I want to share some thoughts about this framework, kicking off with WebSockets, moving on to Action Cable, and then wrap my head around the problems that WebSockets are the answer to and the array of solutions one may put in place.

The grand finale will be on the structure and dynamics of our hero of the day - Action Cable.

What are WebSockets? If you try to find that answer on the internet, you may get statements like:

"WebSockets are those cool things the Node people get to use”

“I heard that WebSockets are the future”

WebSocket connections enable simultaneous and bidirectional communication, allowing both client and server to send messages at any time through the channel.

Another advantage of using WebSockets is once you establish the connection you don’t need to exchange much metadata (http headers). Since there is one WebSocket per client you don’t need to identify yourself every time you send data to the server, because the server already knows who you are as it knows who opened the channel.

The final (and obvious) advantage is that you can have truly real-time features, like chat rooms or notifications, without the need of, for example, using polling, that adds loads to the servers.

On the other hand, the big advantage of using HTTP instead of WebSockets is that there is a lot of stuff already implemented for http, such as caching, routing, and multiplexing, that still isn't WebSockets ready.

So what is Action Cable? In its own Github page:

Action Cable seamlessly integrates WebSockets with the rest of your Rails application. It allows for real-time features to be written in Ruby in the same style and form as the rest of your Rails application, while still being scalable and maintaining performance. It's a full-stack offering that provides both a client-side JavaScript framework and a server-side Ruby framework. You have access to your full domain model written with Active Record or your ORM of choice.

It sounds awesome. Action Cable is a powerful addition to Rails, providing a clean interface for both client-side Javascript code as well as server-side Rails code. One thing that I found particularly interesting is Rails 5 comes with Redis by default because Action Cable uses it as a pub-sub service for the channel's subscribers.

Why we need WebSockets

This is all very interesting but we, as a company, use technology to solve our clients’ problems. So why do we need WebSockets and Action Cable? I found three main reasons.

The first one is when one needs to send and receive data rapidly with the server, for example, in online browser-based games that need to exchange several messages per second with the server, or information about the stock market, that is constantly changing.

Another is streaming. WebSockets are a good option, although I think Rails is not commonly used for streaming applications. This may change in the near future with the help of WebSockets and Action Cable.

And last, but not least, live elements, such as comment sections that are automatically updated when new content is added without a page refresh and, of course, chat rooms. Here we want the page to update when the data changes on the server without the user's intervention, making the most out of Action Cable's capabilities.

But there are alternatives to WebSockets.

Polling is a popular solution!

Polling makes the client ask the server periodically if there is any new data. The advantage? It's rock solid and very simple to set up. The main disadvantage is adding load to the servers. HTTP caching is very good to alleviate that load.

Polling is ok for things like comments sections, but not for rapid communication needs. One example is Basecamp chat app, that used 3-second polling for 10 years, but with Basecamp 3 moved on to Action Cable.

Other "not-so-popular" options are Long-Polling and Server-Sent Events.

In Long Polling the client sends a request to the server for new data and, if the server has new data, it sends a response back like a normal HTTP request; if not, it holds the request and completes the response when new data appears.

Server-sent events are one-way connections from server to client. These, not only lack proper support, but also do not allow the client to send data back to the server.

Just to get the feeling of Action Cable in action I built a simple chat app. It's login based, has one room to exchange messages, and you can see the users that are online. I'm now going to talk about the main parts related to Action Cable.

When you create your Rails 5 application you have now one more folder inside the app directory, the channels folder.

Under the folder channels you have the application_cable folder that contains the channel.rb file and the connection.rb file.

The connection.rb file inherits form ActionCable::Connection::Base and it's used for general authentication. We can use this module to query the database for a specific user that is making the connection and ensure that the user is allowed to listen to the channel.

The channel.rb inherits from ActionCable::Channel::Base and it's similar to the ApplicationController in our normal Rails Application. 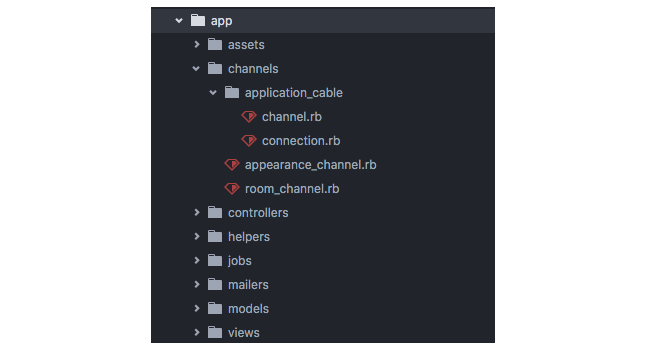 Then, we have two channels under the folder, the appearance_channel.rb and the room_channel.rb. Those were the channels that I created. The channels have the same subscribed and unsubscribed methods: 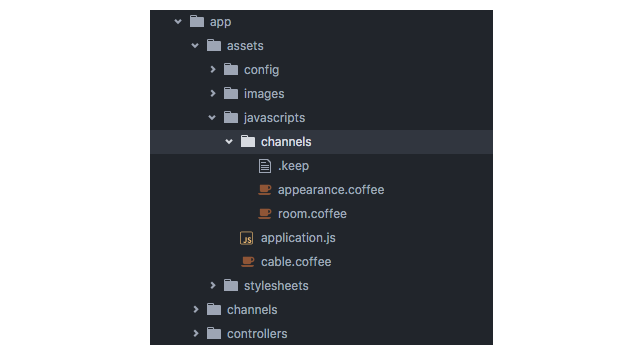 From the client-side we have the cable.coffee file that is responsible to create the connection between client and server.

We can see in the image above how the channel subscription is made.
The subscribers have some methods in common:

Rails is alive and is bringing us more (and better) frameworks to help create products more efficiently.

Action Cable is one of those frameworks and I truly believe it can be very useful to build live elements that are so popular in nowadays web applications.

I'm also curious about the gems that can build on top of Action Cable, and looking forward to how the community will embrace this new tool.

At Imaginary Cloud we work with a wide tech stack, including Ruby on Rails. If you need help with this tech or similar ones in your software development project, we have a team of experts waiting for you! Drop us a line here!