What is Julia, and why is it becoming the favorite programming language for Data Scientists? And what are the differences and similarities to Python?

We're going to highlight Julia's characteristics using Python as a reference and discuss the true potential of this up-and-coming programming language, which is becoming an essential tool to work with data but also for other general uses.

And we'll also let you in on how Python and Julia got their names.

This article is not supposed to determine if Julia is better or worse than Python because Python's importance has been more than proven for the last three decades. We're using it as a reference and contrast to fully understand the potential of this new programming language.

This comparison will also be limited to Julia's scope of action in Data Science and Machine Learning since only recently its developers have been delivering packages for web development and other areas where Python is more than established.

Python is one of the world's most popular programming languages. Introduced in 1991, it's a high-level, interpreted, general-purpose, multi-paradigm language with an impressive number of libraries and tools dedicated to web and software development, Artificial Intelligence (AI), and Machine Learning (ML). If you want to program something, it will probably be in Python.

Developers love Python because of its power, versatility, and readable syntax, which is easy to understand and learn. Almost 70% of developers report using Python to create high-performance algorithms in AI and ML for Natural Language Processing and sentiment analysis. Along with R, Python is the language of choice for Data Science.

Python's versatility derives from the vast amount of external libraries developed by its extensive community of developers. In Data Science, Python relies on many of those libraries to handle mathematical and scientific functions. NumPy, TensorFlow, PyTorch, Pandas, and Maplotlib are some of the most commonly used.

Another compelling reason for using Python is that it supports common data formats like CSV and JSON files, and it is possible to interact with SQL tables.

A recent addition to the programming language universe, Julia was created in 2012 to answer the needs of the Data Science and Machine Learning community for a faster, math-oriented language, getting its first stable release in 2018.

Touting speed as one of its core qualities, Julia combines the best parts of other programming languages while making the most of modern hardware with Concurrent, Parallel, and Distributed Computing capabilities.

Julia is a dynamic, high-level, high-performance programming language, specifically created for technical computing, with a similar syntax to Python. It is mostly used in Machine Learning, Data Science, data mining, numerical analysis, and any mathematical purpose since linear algebra is a core function of this language.

Designed to handle complex data models, Julia's simplicity, high performance, and speed are its selling points. But the deal-breaker for scientists is the possibility of transposing the formulaic language of Science to code: Julia allows the use of Greek letters, making possible the direct use of mathematical formulas in the code, instead of translating those formulas into coding language.

Like Alan Edelman - one of the co-creators of Julia - said in this presentation at MIT, "You don't code the Math, code is the Math."

The creator's Manifesto, Why we created Julia, sums Julia's aspirations in a nutshell:

"We want something as usable for general programming as Python, as easy for statistics as R, as natural for string processing as Perl, as powerful for linear algebra as Matlab, as good at gluing programs together as the shell. Something that is dirt simple to learn yet keeps the most serious hackers happy. We want it interactive, and we want it compiled. (Did we mention it should be as fast as C?)"

Such ambitious goals in a modern programming language require exceptional features. What sets Julia apart to support these claims?

Python users will pick up Julia's syntax very quickly. But, although they look and feel similar, their paradigms and logic are sometimes very far apart. By contrasting Julia with Python, it may be easier for Pythonistas to understand the potential of this new language.

Python stands currently at the top of the most popular languages for any type of programming development. It's been active for over 30 years and has gathered one of the largest developer communities for any language, providing solutions and support for any imaginable situation.

Julia has a smaller yet enthusiastic community, and most support is still provided by the authors, although the number of followers has been growing steadily. There are Julia-specialized blogs and a growing community spread across many other platforms sharing their knowledge on how they're using it. At the time of writing, Python was leading the Tiobe Index, the most famous monthly popularity index of programming languages, while Julia stood at number 36.

As Julia evolves to other areas beyond Data Science, it is foreseeable a rise in its popularity. Recently, the language started accepting web development frameworks, which will expand the scope of development possibilities and, consequently, the number of developers working with it.

Now, the question you've been longing to be answered since you started reading this.

The name "Python" derives from "Monty Python's Flying Circus", the legendary BBC comedy series from the 1970s. Guido van Rossum was reading the show's published scripts when he started developing this new coding language and thought it was a good name. However, Python is clearly no-nonsense, unlike its namesake.

Julia's name is not inspired by anything in particular. Someone suggested it once during a casual conversation to Alan Edelman as a good name for a programming language. Edelman thought so too.

Julia was designed specifically for data, exhibiting a math-friendly syntax. On the other hand, Python was created with a different purpose in mind. As it became popular and expanded to a wider variety of uses, it also became a Data Science programming language. Math is at Julia's core; Python needs an external library like NumPy for statistical work.

The same reasons apply in ML. The creators of Julia wanted a powerful, fast programming language for machine learning, so they made it able to support linear algebra and all the equations necessary to develop work in this area. Python can handle math-oriented tasks through NumPy, but this is not a native feature of the language.

Julia can integrate code from Python or C and also use their libraries. Code written in these languages can be converted to Julia, while the opposite is not possible. Julia can also interface directly with Python and share data between both languages.

Speed is a feature by design in Julia. It is so fast that it is only beaten by C. Python is versatile, powerful but slower, mostly because it's an interpreted language. 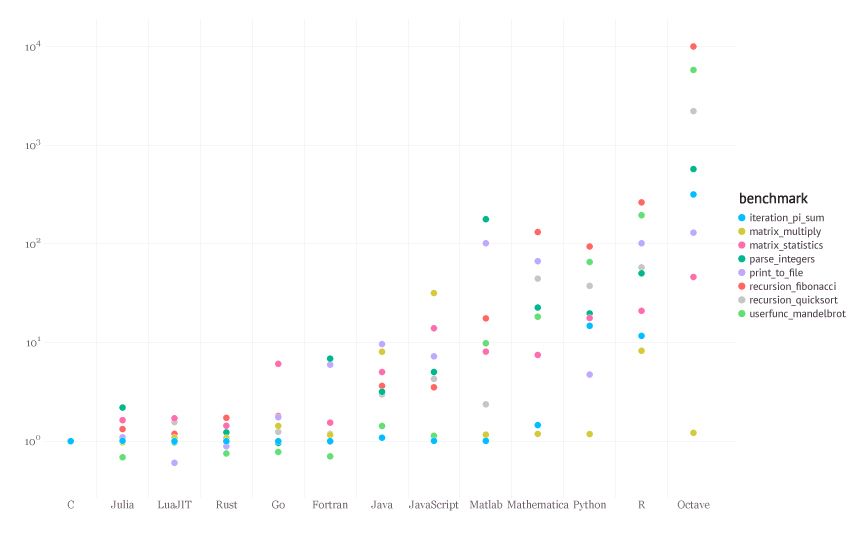 This brings us to one of the top differences between Python and Julia. Python is an interpreted language, which means that the program goes through an interpreter that converts it into bytecode, to be then executed by a virtual machine. Julia is compiled at runtime through LLVM, which improves development and deployment speed.

Python and Julia are dynamically typed and very easy to write and understand. Both languages have similar syntaxes but present some
noteworthy differences that can be explored in Julia's documentation with more detail.

The biggest difference in both syntaxes is that Julia is more math-friendly, attracting data scientists who can use their scientific formulas as code and need fewer hardware resources to achieve high-performance computing results.

Python is a general-purpose language, so it lacks some core capabilities that cater to this community, compensated by the vast amount of libraries that make programming high-performance algorithms an easy task.

Here’s how Julia and Python stack up against each other.

Julia Vs Python: is Julia the future?

Julia is a specialized language, mostly used by a niche community. As developers and community expand Julia's features and scope, it will likely become a popular, in-demand language.

Python is a mature language with millions of users and more third-party packages than we can count. It is applied everywhere, from gaming to data science. Python is one of the basic languages in every developer's curriculum, and it's not going to be replaced anytime soon since new languages always find a way to integrate with it.

Is Julia worth learning? Yes, especially if you're working with data models. The volume of information produced today requires a powerful language like Julia, capable of working with complex models, faster. Julia is already being used in financial analysis and climate data, and developers are always finding new ways to use its superpowers in new applications.

There's a lot more Julia can do, with new features being added in each new version expanding its scope of use.

And if you want to learn how to program in Julia, there is a free course on YouTube for nervous beginners.

Want to read more about Python?

More than 500.000 people read our blog every year and we are ranked at the top of Google for topics such as Python. If you liked this blog post and would love to read all our blog posts on Python,