R and Python are the most popular Data Science languages. They are both open-source and excel at data analysis. Despite their competitive popularity, R and Python are actually quite different, and one might be more suitable than the other for particular situations.

This article introduces the importance of both languages for Data Science. Further, it describes their key differences regarding their abilities to handle data and machine learning applications. Last but not least, we also explain which one to learn and why. 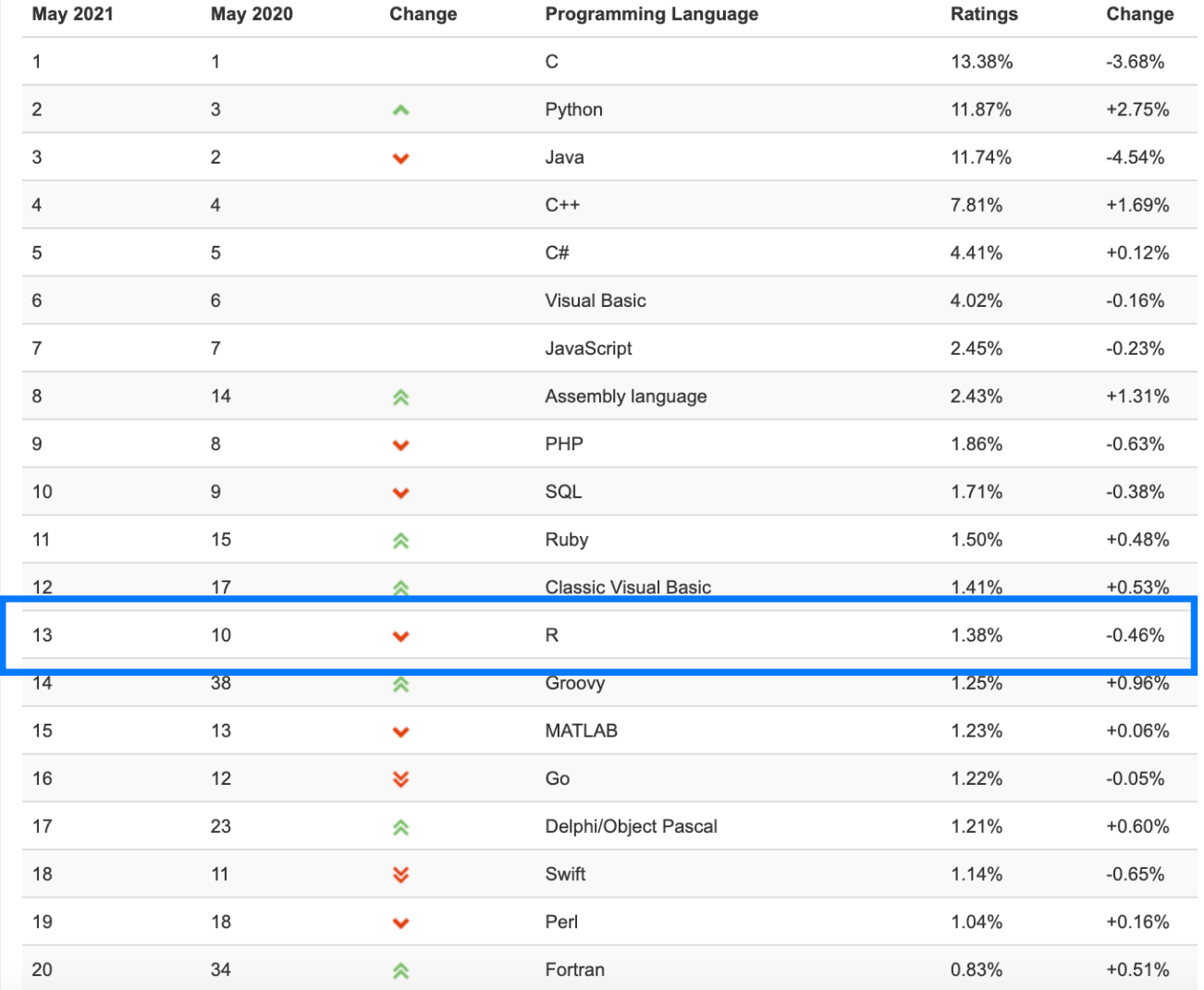 This software was first introduced in 1993, designed by Ross Ihaka and Robert Gentleman. Since then, it has come a long way and conquered an admirable reputation for its ability to handle data science, visualization projects, and statistics.

Unlike Python (as we will explain later), the R language was developed exclusively to analyze data and to develop applications and software solutions that are able to execute statistical analyses and data mining. It is a complete ecosystem for data analysis, with an incredible variety of packages and libraries available.

Python is one of the world's most popular programming languages. It was initially introduced in 1991, designed by Guido von Rossum. According to "Developer Economics: State of the Developer Nation 20th edition" (2021, SlashData), Python has strongly been conquering Data Scientists' attention as the prime language in the field.

"The rise of data science and machine learning (ML) is a clear factor in Python's popularity. Close to 70% of ML developers and data scientists report using Python." (SlashData)

However, Python's popularity does not come exclusively from data science. Additionally, this multi-paradigm language also provides a vast and impressive number of libraries and tools to handle software development, artificial intelligence (AI), and machine learning (ML). In sum, as a general-purpose language, it is pretty much possible to use Python to do everything!

The purpose is probably the core difference between these two languages. As mentioned, R's primary purpose is statistical analysis and data visualization. It relies heavily on statistical models and does not require many lines of coding to show off its analytics abilities. In fact, this reason is also what makes it so popular among researchers, engineers, statisticians, and other professionals without computer programming skills.

Moreover, researchers often prefer to use R since it provides plots and graphics that can immediately be used for publication, considering it contains the correct mathematical formulae and notation. Overall, R also attracts attention for its data visualization, regarding graphs, charts, plots, etc. These types of visualizations facilitate data interpretation and identification of patterns, outliers (or anomalies), and trends in data sets.

In turn, Python is a more general-purpose language with a significant focus on production and deployment. Even though it requires computer programming skills, Python is actually reasonably easy to learn due to its readable syntax.

This language is mainly used by developers or programmers to perform data analysis as well as to utilize machine learning in production environments. Plus, Python provides the needed flexibility to create new models from scratch since it can be integrated with every development stage.

Python is more versatile than R when it comes to data collection. On the one hand, Python supports every kind of data format (for instance, CVS. and JSON files), and it makes it fairly easy to retrieve data from the web by using the Python Requests library. Moreover, it is also possible to import SQL tables into Python's code.

On the other hand, R imports files from CSV, Excel, and text files. R is not as straightforward as Python when it comes to grabbing data from the web, but it is possible to use the Rvest package for basic web data extraction. Plus, SPSS and Minitab files can also convert to R data frames.

As said before, R stands out for its data visualization abilities. It illustrates the results from statistical analyses by using plots, charts, and graphs. For more advanced plots, data scientists can also use ggplot2, one of the most popular R packages. It is possible to build almost any type of graph using this tool. Plus, ggplot2 allows users to change components within a plot with a high level of abstraction.

Python is not as strong as R regarding data visualization. However, Python users can always rely on the Maplotlib library. This tool enables users to utilize interactive figures and create several types of plots (histograms, scatter plots, 3D plots, etc.).

Contrarily, Python users can use Pandas, a single library, to perform several methods of data manipulation. Pandas is a popular open-source tool that stands out for handling data analysis and managing data structures.

In addition to executing data manipulation, Pandas is also a widely known tool for data exploration in Python. In fact, Pandas is probably the primary data analysis library for Python. It allows users to filter, sort, and display data easily. Thus, enabling effective statistical and data mining treatment within a data set.

Data modeling consists of creating models to establish how data is to be stored in a database. On the one hand, Python offers several solutions regarding data modeling according to the specific purpose of each data. For instance:

Python offers various IDEs to choose from, being the most popular ones Jupiter Notebooks, Spyder IDE, and PyCharm. R language is also compatible with Jupiter Notebooks; however, the most used R solution is RStudio. RStudio is available for R users in two formats: RStudio Server (access via web browser) and RStudio Desktop (runs as a regular desktop application).

The majority of AI features and libraries were first introduced in Python and only then in R. Currently, both R and Python are compatible with TensorFlow and Keras (another library for artificial neural networks). In September 2020, the Torch library became available to R. The torch for R ecosystem includes torch, torchvision, torchaudio, and other extensions.

R vs Python: Which one to learn?

Due to its easy-to-read syntax, Python is considered fairly easy to learn. It excels for its readability and simplicity; thus, the learning curve is not very steep. Plus, it is a complete language and overall very suitable for beginning developers.

However, R is easier to learn for those who do not have computer programming skills. It allows users to start executing data analyses immediately, but it can get complex as it employs more advanced analytics and functionalities. Further, R is widely used by data scientists as well as by scientists from other areas (e.g., biology, physics, management, engineering, etc.) that wish to analyze data e produce graphics quickly with data from experiments and other researches.

Another critical aspect to consider when choosing which one to learn is the aim of the data analyses. On the one hand, R is primarily recommended for users interested in statistical learning, data exploration, and experimental designs. On the other hand, Python is mainly used for data analysis within web applications and is also the fittest option for machine learning.

Despite competing for the title of "The Number 1 Language in Data Science", R and Python are indeed very different, and that difference starts in their approach.

R stands out for statistical learning, providing a vast number of functionalities for data analysis. It is an incredible complete language to handle advanced analytics in Data Science and in other fields (e.g., biology, management, and physics). Plus, R users do not require computer programming skills, making it a more accessible language for researchers and scientists. Another great advantage of using R is that it excels at data visualization.

Comparatively, Python's approach to Data Science is more concerned with production and deployment. This language is primarily used for data analysis within web applications. Moreover, Python is the most suitable language for machine learning, and it is an excellent option for Data Science pipelines.