Choosing an appropriate tech stack for web application development is a crucial first step in your software development project's lifetime. It serves as a foundation for adapting the product to your needs and improving its performance.

Good technology stacks guarantees that your product is of high quality and fulfils your consumers’ expectations. Hence, choosing a suitable tech stack for web development that is aligned with the demands of your product from the start eliminates a large number of future complications including fixing or updating cases. This may undoubtedly help you save a substantial amount of money and time.

Although no business has the same goal, we can identify common needs when one wants to start a new software development project:

This article showcases up-to-date information about current languages, trends, and an overview of the frontend and backend development, as well as aspects to consider when deciding on a tech stack for software development.

What is a tech stack?

Most web development projects are built with different technologies but they often have the same fundamental concerns. Every website needs:

Simply put, these three options make up a stack. But how are you going to choose the technology that suits your project best? Let’s take a look at the most popular tech stack for web development, from frontend to backend technologies, and where exactly they’re used.

React is one of the most widely used JavaScript libraries for frontend development, according to Stack Overflow Survey 2021. The main purpose of React is to be simple, scalable, and fast. It is used along with React Native and Redux for enterprise-grande mobile applications.

The React library is used to build dynamic, SEO-friendly websites, mobile apps, single-page apps, dashboards, and visualization tools. Some of the most popular platforms and apps have vouched for the business benefits that Reactjst brings to the table: Facebook, Dropbox, Netflix, Reddit, amongst others.

From a business perspective, the main benefits of picking React for your project are speed of iteration - publishing updates for apps (including web application) is much faster and smoother; and easy maintenance - as a business person, your worst dream is your app chasing in the middle of the peak shopping season; so when you build a web application using React, a major benefit you get is that it is easy to maintain.

The usage of React in the web development world, as of 2021: 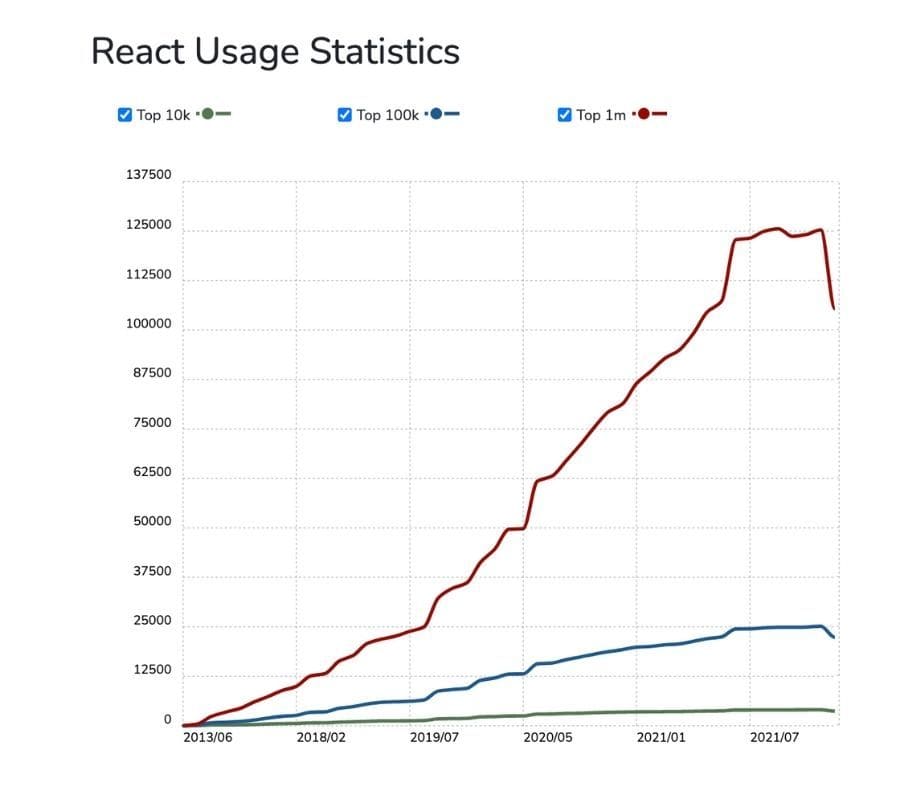 Python is an object-oriented (based around data) and high-level programming language, also being the preferred coding language for those who want rapid software development of their project.

Over the years, Python has seen an outstanding growth and commendable influence in the IT world, impacting the fields of software development, data science, artificial intelligence, machine learning and computer vision. It has been conquering the top ranks as one of the most popular programming languages, again according to Stack Overflow Survey 2021.

Although Python can become quite a challenge for large projects, Python does foment rapid application development, thanks to its modules and packages, which are at the core of reusable code.

The usage of Python in the web development world, as of 2021: 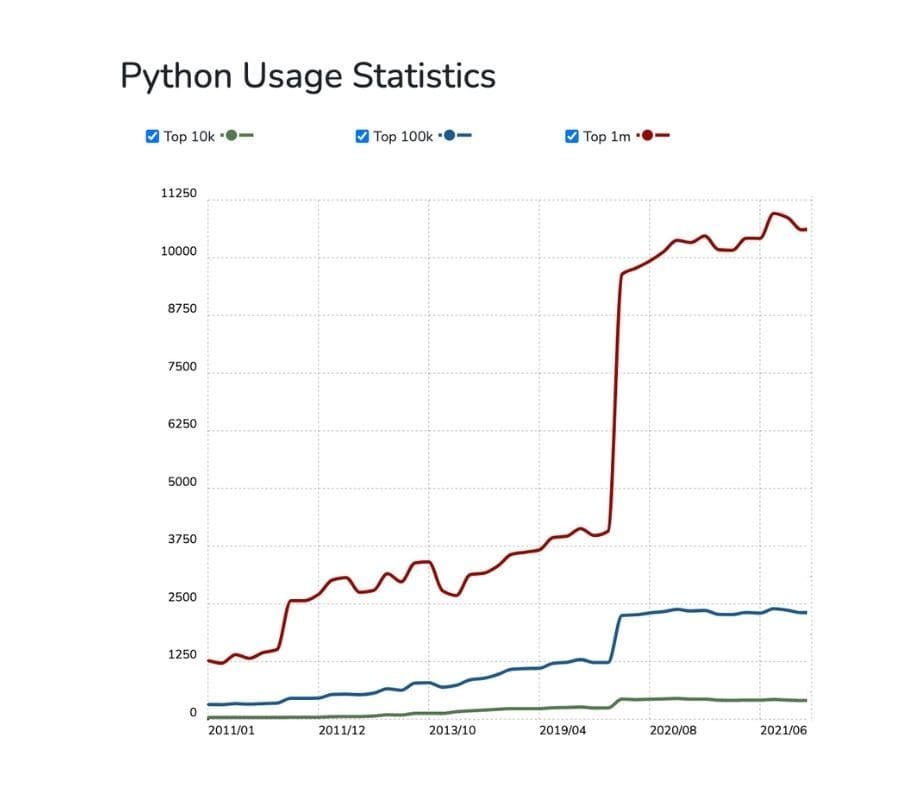 Node is an event-driven, non-blocking framework, being the 6th most popular technology amongst developers. Because of its adaptive evolution and minimal resource requirements, Node has become a standard for business giants like LinkedIn, Uber, and PayPal.

According to Hackernoon, companies have admitted to loading-time savings of up to 60% with the use of Node. It’s important to note that Node is best suited for organizations that need to build scalable, high-performance web apps that receive a significant volume of traffic. These might be social media networks, e-Commerce sites, or any other sort of online application that requires constant updates when subjected with high traffic.

The usage of Node in the web development world, as of 2021:

As a business, it’s normal to want a mobile and web applications that can help you cast a wider reach and achieve the growth you expect. Angular helps you deliver just that as its biggest strengths are speed, productivity, ease of access and the ability to deliver rich experiences across web and mobile interfaces.

Owing to the various advantages of Angular, brands galore use this framework for their websites, including Forbes, IBM, Paypal, Microsoft Office Home, amongst others.

This shows that Angular is already a market leader in software development frameworks and the preferred language for leading businesses.

Angular is suitable for large projects with a more complex structure and framework, because it includes a lot of ready-made solutions and an efficient system for collecting and storing information. These elements simplify the development of extensive projects and ensure robust performance.

The usage of Angular in the web development world, as of 2021: 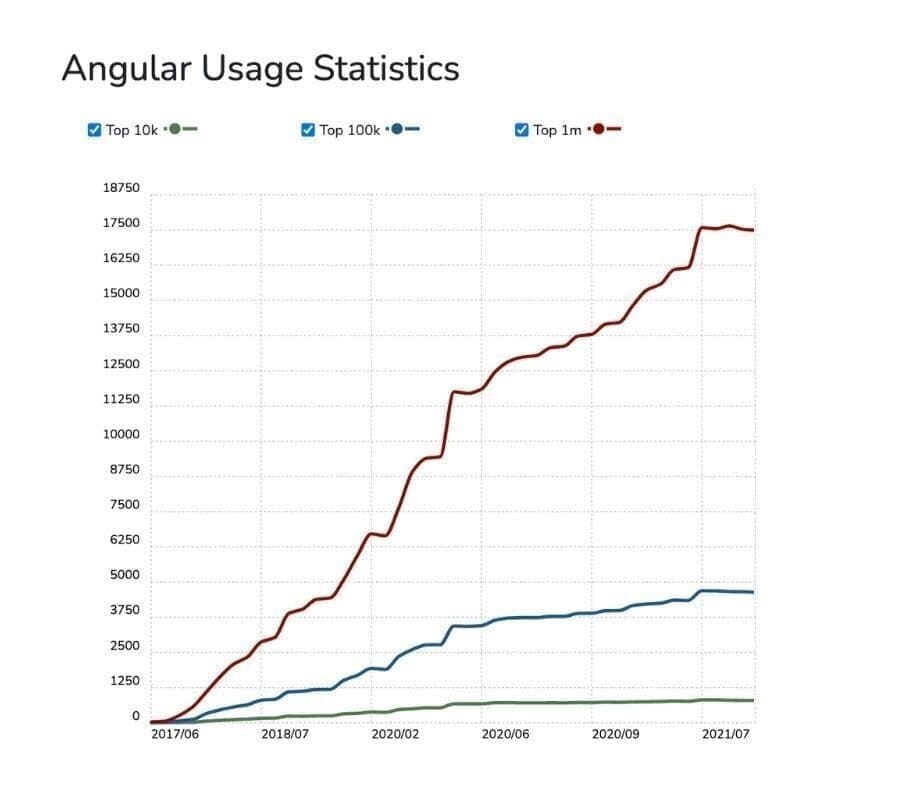 Want to know more about how Angular can help you achieve your web development project goals?

Also on the top 5 of most commonly used web frameworks in 2021, Vue is another favored front-end tool used to build web interfaces and one-page applications without requiring multiple resources.

Do you want to build a MVP? Discover here how.

Vue’s existing reusable components and templates make it easy to accelerate the app development process and launch your MVP in a time-efficient manner, no matter its complexity. Vue has specifically been designed to enable teams to convert small pieces of an application rather than doing a complete rebuild. This means there is a low risk in trying it compared to other frameworks where a "no turning back" approach might be the only option.

Vue’s great performance is evidenced by adoption by well-established companies like Adobe, Trustpilot, Alibaba, and Xiaomi.

The usage of Vue in the web development world, as of 2021: 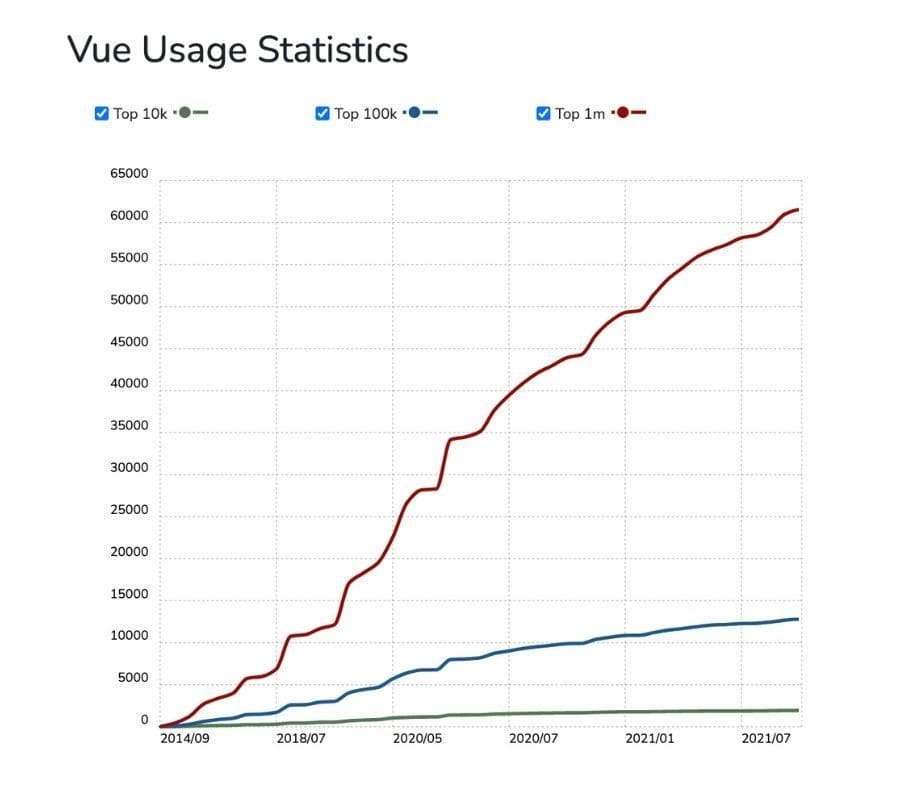 Ruby is a general-purpose programming language for backend, meaning it enables the creation of a variety of programs. You may have heard of it in connection to Ruby on Rails, one of the most famous web development frameworks that has enabled companies such as Twitter, Airbnb, Dribble and Hulu to grow into some of the biggest names.

Since Ruby comes with an open-source library, businesses galore choose it as it’s an extremely flexible language and it enables developers to create software relatively quickly. Some might find Ruby as one of the most time-efficient languages on the market, especially when used with Rails, so it’s no surprise that startups often pick Ruby when they want to build and scale their product quickly. Hence, the MVP approach is also often associated with Ruby on Rails.

At Imaginary Cloud, we have Ruby professionals that can help you address your next web development project. Tell us more about your project here.

Much of Ruby's popularity comes from the association with Rails, however Ruby can also be applied to static site generation, command-line tools, web scraping, automation, DevOps, and data processing. And although Ruby has developed a lot, it still is not always the first choice for programmers as it is still seen as a niche language. But the popularity is also associated with the limited number of Ruby developers on the market.

Your project will benefit from choosing Ruby for the backend if:

Want to learn more about how Ruby on Rails works? Subscribe here.

The usage of Ruby on Rails in the web development world, as of 2021:

What to consider when choosing a tech stack?

Like many other technologies, what is good for some companies might not be the best for others. We can, indeed, conclude that all React, Python, Node, Angular, Vue and Ruby are viable solutions for a seamless web development project, but have in mind that, from the start, you will want to choose a technology stack that sets both your customers and internal teams up for success.

Time-tested technologies may not be appropriate for the product or application your team is developing, and new technologies may lack the necessary functionality or support, so your priority should be to select a tech stack that will increase the performance of your web application while also allowing your technical team to manage the product's codebase and iterate more quickly.

So, when choosing the best tech stack for web development, consider the following:

Start by evaluating your product vision and the functionality that will be built to achieve that vision. For instance, if your product or service handles large amounts of data, you should prioritize technologies that handle data rapidly and efficiently.

Spending more money on ready-made technologies may help you build your product faster, but it may come at a cost if the tools are not as configurable as you want. If cheaper technologies do not meet the technical standards you demand, they may have other risks. An appropriate technology stack should save costs while increasing value in the long run.

Time and Materials contract vs Fixed Price contract: Find our which one is more suitable for your project.

The experience (and satisfaction) of a user increases demand and keeps you in business. You want to find solutions that deliver a high-quaulity experience while also allowing you to launch product upgrades fast. Your ability to provide clients with fresh experiences can help you collect quicker feedback so you can enhance your product.

Sure, new frameworks or languages may seem to provide benefits, but your internal team may lack expertise dealing with them. You must account for the additional time required to learn the new technology, but it can be an issue if the new technology is experimental and prone to failure. Consider integrating your team to expand your capabilities.

If you need a deeper insight into choosing a tech stack for your project, contact our team and make it clear. We help you identify the specific needs and objectives of your software, web or mobile app, as well as assemble a team of the right people to make it happen.

Looking to improve or start your web development project?