JSON and XML fulfil a similar purpose of organizing complex data in an understandable and readable format to various APIs (Application Programming Interfaces) and programming languages, such as Python, Ruby, and JavaScript. This type of technology is essential because structuring the data is what allows us to share it successfully. However, despite aiming for the same goal, they have different ways to operate.

This article compares JSON and XML to fully understand their benefits and why they stand on opposite sides of the wrestling ring. I start by providing a definition for each, followed by an in-depth look at their differences and similarities.

Curious to know which one will fit you best? Keep reading to find out.

XML stands for Extensible Markup Language. A markup language is a set of symbols presented in a human and computer-readable format. These symbols can be placed in a document's text to organize it and label the different parts. Moreover, XML is extensible because the developer can freely create self-descriptive tags or languages. This language does not necessarily present data, but it allows developers to store and organize it to establish how the data will be presented. Simply put, XML is a markup language created to store data.

XML originates from SGML (Standard Generalized Markup Language) but in a more flexible and straightforward way. It was designed to facilitate the interchange of data by turning different systems into universal. To do so, XML implemented a set of specifications regarding semantics and custom markup languages: it established a standard and clear structure for any application, ensuring data integrity and interchange.

However, it is not a programming language since it does not perform algorithms or computation. In other words, it does not have its own set of grammar rules and vocabulary to generate computer programs. XML was developed to identify, store, and organize the data. Further, it can be advantageous in a variety of systems since it can adopt successful HTML features.

JSON stands for JavaScript Object Notation, meaning it is the primary data format in JavaScript applications. The growing popularity of JavaScript consequently led to the creation of more JSON messages. Even though other formats are also eligible in this programming platform, they require additional effort, while JSON is already integrated and perfectly paired to work with JavaScript. Plus, despite being written in JavaScript, JSON is language-independent (just like XML), meaning you can use it with any programming language.

JSON's first message was sent in 2001 and, since then, there has been a growing adoption of this data format which is utilized to store and transport data. In fact, similarly to XML, JSON also receives data from a web server and transmits it to a web page. However, it needs less coding and the size is smaller, thus contributing to faster processes and data transportation.

JSON vs. XML: the differences

Despite resolving very similar purposes, there are some critical differences between JSON and XML. Distinguishing both can help decide when to opt for one or the other and understand which is the best alternative according to specific needs and goals.

First, as previously mentioned, while XML is a markup language, JSON, on the other hand, is a data format. One of the most significant advantages of using JSON is that the file size is smaller; thus, transferring data is faster than XML. Moreover, since JSON is compact and very easy to read, the files look cleaner and more organized without empty tags and data. The simplicity of its structure and minimal syntax makes JSON easier to be used and read by humans. Contrarily, XML is often characterized for its complexity and old-fashioned standard due to the tag structure that makes files bigger and harder to read.

However, JSON vs. XML is not entirely a fair comparison. JSON is often wrongly perceived as a substitute for XML, but while JSON is a great choice to make simple data transfers, it does not perform any processing or computation. XML might be "old" and complex, but its complexity is what enables this language to not only transfer data but also to process and format objects and documents.

Unlike JSON, a document in XML is normally self-describing. Usually, an XML document has a link to its schema on the header (schemas are also written in XML, and defined in the XML specification by W3C). Because the schema of a document describes what can or cannot be on a document, it has two advantages:

There is also support for JSON schemas, meaning that you can do the same as XML using the data format in question. However, it’s not built into the technology. Therefore, extensions to support JSON schemas are required.

Another great advantage of using XML is that it handles comments, metadata, and namespaces. This feature makes it easier for the developer to keep track of what is happening and to share the document with other team members. Moreover, XML enables various data types (such as images and charts), unlike JSON, which only supports strings, objects, numbers, and boolean arrays.

Regarding security, when using XML, DTD (Document Type Definition) validation and external entity expansion are enabled by default, making structures disposed to some attacks. Disabling these make XML structures safer. On the other hand, utilizing JSON is usually safe at all times, although it might be more at risk when JSONP (JSON with Padding) is used since it can result in a CSRF (Cross-Site Request Forgery) attack.

Last but not least, the way data is store in XML also differs from JSON. While the markup language stores data in a tree structure, contrarily, JSON stores it like a map, which entails key-value pairs. Moreover, JSON does not utilize end tags and can use arrays (data structures with groups of elements).

Despite the many differences between JSON and XML, what mainly distinguishes them is data parsing. As previously mentioned, JSON can easily be parsed by a regular JavaScript function since it is already integrated. The same does not happen with XML, which has to be parsed with an XML parser, thus being more difficult and slow. Nonetheless, some languages, like Java, have XML parsers as part of their standard library. 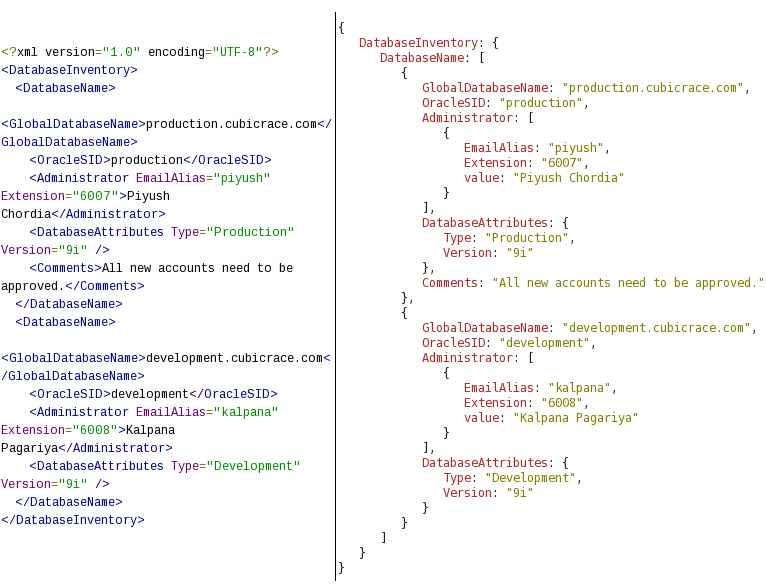 JSON vs XML: the similarites

Even though JSON and XML differ a lot from each other, they are often compared for some reason(s). First of all, as mentioned before, they both serve very similar purposes, which is to store and transfer data. Second, they both do it using human-readable text, making it easier to work and interpret.

Moreover, a great advantage of using XML or JSON is that they can both be fetched with an XHR (XMLHttpRequest). An XHR is an API available in scripting languages like JavaScript, PHP, Python, Ruby, etc., and its object enables to request data from a web server. Plus, both XML and JSON can be parsed and compatible with the majority of programming languages.

Finally, despite the differences regarding structure and semantics, both JSON and XML follow a hierarchical order of values within values.

As we can observe, their differences are more significant than what they have in common. Therefore, the ultimate question is: if JSON and XML serve a similar purpose but yet are so distinctive, which one is better?

JSON vs. XML: which one is better?

Truth be told, the answer to this question is not that simple. XML had its golden age upon its creation. It contributed tremendously to data interchange in a universal language, transforming the world of computation. To these days, even though it is often considered "antique," XML has admirable features that go beyond fast processing and data transportation, being, consequently, more complex than JSON.

Therefore, as previously mentioned, JSON vs. XML is not exactly a fair comparison. One thing is to compare both technologies considering their purpose according to the developer's goals. In that case, JSON is faster and easier to use. However, another thing would be to compare them considering the features each technology offers. In this regard, even though XML is slower and more complex, it also provides additional features that, to these days, JSON has not yet developed.

Technology never stops evolving, and as JavaScript became one of the most popular programming languages, JSON also began to gain attention increasingly. Further, once JSON is simpler, easier to use, and has an overall outstanding performance with a good speed, it didn't take long until developers started utilizing it.

All in all, to perform data exchanges that do not require many concerns regarding validation and syntax, JSON is most likely the best option. However, the existence of JSON does not discard the importance of learning XML since its complexity and features can go beyond fast data transportation and processing.

JSON and XML are used within the programming languages of operating systems, allowing for shared data. Even though XML is older, this markup language was able to define a set of rules and structure to make interchange of data universal and further produce documents that are both human and computer-readable.

JSON, on the other hand, is a data format and a more modern approach to the same purpose as XML. However, it's favored for data delivery between browsers and servers due to the lighter and faster files it produces. In contrast, XML stands out for its data structure manner.

As we can observe, JSON and XML differ in various aspects, from applicability to coding representation, data structure, and even security. After weighing both XML and JSON in the same balance, one concludes that JSON is the fastest and easiest way to fulfill the data structuring and exchanging mechanism. In this regard, JSON's performance surpasses XML. However, XML keeps playing a significant role in data storage, and its document formats are still very used by developers and set as default in numerous tools.