This article presents the main advantages of Python, a language that is among the most loved programming languages in the world and that, throughout the years, has managed to continuously innovate and emerge in several fields of computer science.

It has been distinguished for its code readability and simplicity. Yet, that is just the beginning of the advantages of Python. Keep reading to find out why Python is one of the best programming languages and how it conquered envying popularity.

What is Python?
➤  How popular is Python?
The Advantages of Python
1. High level makes it easier
2. Multi-purpose and Multi-paradigm
3. Libraries, Frameworks, and Tools
4. Portability
5. Free and Open
6. Powerful Community
Conclusion

Python is considered a high-level, interpreted, general-purpose programming language. It was introduced in 1991 and was first developed by Guido van Rossum, who started working on this language in the late 1980s.

Over the years, Python has had an astonishing growth and admirable influence in the IT world, impacting the fields of software development, data science, machine learning, artificial intelligence, computer vision, and so on. It has been conquering the top ranks as one of the most popular programming languages, and it is the go-to language for many developers and data scientists worldwide.

How popular is Python?

Considering TIOBE Index (August 2021), Python is the second most popular language in the world (C is the first), and it has been considered "Language of the Year" in 2007, 2010, 2018, and 2020. This index is updated monthly and consists of the number of skilled engineers, courses, and third-party vendors. 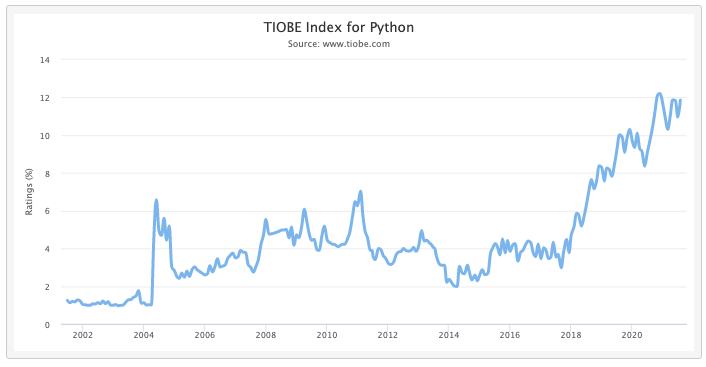 Another great index is PYPL (Popularity of Programming Language Index) by Github, according to which Python is currently the most popular language worldwide. The main indicator of this index is how much a language tutorial is searched. The current table also indicates that Java comes in second and JavaScript in third. 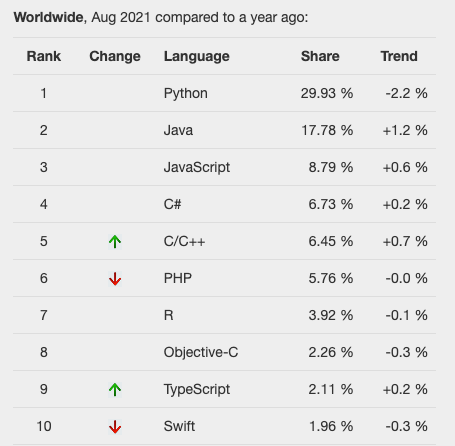 Regarding the job market, Skillsoft Report indicates that Python, Agile methodologies, data security fundamentals, data analytics, DevOps & SecOps, and cloud fundamentals are among the most valued tech skills in the market.

These indexes and reports are important pointers of how much Python is growing in terms of popularity and consequent demand. It has shown a continuous increase over the recent years, especially since 2018, and everything indicates that it will continue improving.

The Advantages of Python

As mentioned, Python is a high-level language, which is easier to use than the ones considered a lower-level language since these last ones do not have has much abstraction from machine language. In other words, - and considering the basic principles of coding -, the more distance there is between the language itself and the machine binary code, the more high-level it is.

High-level programming languages, such as Python, can use natural language elements, making them simpler to use when developing a program. More specifically, Python has an English-like syntax, thus being easy to read, write, and learn.

As mentioned, Python is a general-purpose language, which, as the name suggests, means that it is a language that can be used for multiple purposes, having a vast array of applications.

Python is a great option for software development, allowing developers to use great frameworks like Django and Flask. It can also be utilized for web scripting, desktop GUI development, game development, security operations, and of course, data science - a field in which Python has been conquering the throne as the primary language.

Moreover, Python is also considered a multi-paradigm language, supporting object-oriented, functional, and structured programming. The ability to support multiple programming paradigms is also one of the reasons why Python is so popular.

One of the greatest - if not the greatest- advantage of Python is that it has a vast collection of libraries, frameworks, and tools.

Python's libraries make developers' and data scientists' life way easier by providing pieces of pre-written code that can be reused and integrated into projects or programs. The Python Standard Library comes with Python and is incredibly extensive, containing many built-in modules (written in C) that are ready to be used as standardized solutions for daily programming issues. Moreover, Python users can also find additional libraries available from PyPI (Python Package Index).

For Data Science, Python also stands out for the multiple libraries available to handle mathematical and scientific functions, such as TensorFlow, PyTorch, NumPy, Pandas, and so on.

Python programmers benefit from a great array of frameworks and tools. Regarding full-stack web frameworks, Python has multiple solutions, such as TurboGears, Dash, Web2Py, and of course, Django, which is probably the most popular one.

Plus, for microframeworks, Python also offers many options, including Flask, Pyramid, Bottle, Falcon, FastAPI, and so on. They are microframeworks because they focus on a specific aspect, contrarily to the full-stack frameworks, which usually include a database management system, an HTTP application server, an AJAX toolkit with UI elements, a request dispatcher for server-side development, and also a templating engine.

Python was also designed to facilitate portability. It supports all the operating systems (macOS, Linux, UNIX, and Windows), and developers only need to write code once, and afterward, it will be ready to run everywhere. This does not happen in many languages, considering that in some, the developer may need to change the code according to different platforms.

Furthermore, Python also has the TcI GUI toolkit that enables developers to implement portable GUIs. Additionally, it offers advanced integration support with other languages, which is why it is sometimes used as a "glue" in-between components written in different languages for some applications.

Python is a programming language developed under the OSI-approved open-source license, which means it can be freely used and distributed by everyone.

The fact that Python is free and open-source also contributes to the strong community it has. Python programmers can download the source code, modify it and distribute it as they wish. Consequently, thousands of Python contributors have uploaded custom-built software packages to Python's online repository, making Python's toolbox even more powerful, useful, innovative, and ready to handle any project.

Moreover, Python's community has had rapid growth over the years. It is known for being very inclusive, welcoming everyone from beginners to experienced developers, data scientists, academics, students, etc. In fact, it has become such a large community that one can quickly find frequent updates, recommendations, and ways to fix pretty much any issue.

Due to the several implementations in many different fields and its admirable popularity, Python has cultivated a massive supportive community in which anybody is invited to participate and discuss solutions and different points of view.

After taking a close look at the advantages of Python, we can surely conclude how exceptional this programming language is. It is simple, has a strong community, and can do pretty much everything due to the vast number of libraries, frameworks, and tools available. However, just like any other language, it is not perfect, having its disadvantages as well.

It is very hard - not to say impossible - to develop the perfect programming language because, simply put, one cannot have it all in one. For instance, as we explain in our article Python vs. Java, "Python stands out for its simplicity and practicality, making development less complex. On the other hand, Java is not as simple to use, but it does offer outstanding stability and is a great way for the developer to apply computer science fundamentals.".

First and foremost, the best language will always be the most appropriate one considering the project. Python has shown great potential, and its growth is notorious, especially due to its ability to operate in different fields. However, for many, it is not always the primary language for a specific purpose. For example, Python did not really have a particularly good reputation regarding mobile development for a long time since it is not iOS or Android native (which can slow deployment or make it more complex). Yet, as a cross-platform language, Python enables developers to use GUI frameworks (e.g., Kivy and BeeWare) to transform Python's code into versions that work with Android, iOS, or other platforms.

Therefore, once again, almost everything is possible with Python, but where does it excel? Well, it will always depend on its applications and how we can make the most out of Python's advantages. Currently, it mainly stands out in web development, database programming, data science, scripting and automation.